*Licht and donker are added to the colors to mean light and dark: lichtblauw light blue

Usage of the colors in a sentence (adjectives)

Adjectives are words that describe characteristics of objects, people and ideas. So colors are often used as an adjective.

For example: Het T-shirt is wit.

Which means The T-shirt is white . In this sentence “white” (adjective) describes the T-shirt (which is the noun).

Het T-shirt is wit. The T-shirt is white   (no -e because the adjective comes after the noun)

Het witte T-shirt  The white T-shirt . (an -e is added because the adjective is in front of the noun)

The Colors of the Dutch flag.

The colors of the Dutch flag are red, white, and blue (rood, wit, blauw). However, when you think about the Netherlands it is often associated with the color orange (oranje). Dutch people wear orange (oranje) on days of national pride, and their sports teams’ uniforms are almost all a bright orange color.

It may seem strange, but there is some interesting history behind why the Dutch have an affection for this particular color.

Dutch history of the color orange

The orange obsession can be traced back to the very roots of the Netherlands: Orange is the color of the Dutch royal family.The lineage of the current dynasty—the House of Orange-Nassau—dates back to Willem van Oranje (William of Orange). Willem was the leader of the Dutch uprising against the Spanish domination over Holland, this led to Dutch independence in 1581.

Perhaps the biggest exhibition of orange national pride appears on Koningsdag (King’s Day), the April 27 holiday commemorating the birthday of the country’s king. You will be struggling to find a Dutch person who’s not wearing orange on this day. And on any royal birthday, the Dutch red, white, blue flag is flown with orange banners attached.

Do you want to learn, speak and read more Dutch?

Being able to name and pronounce the colors in Dutch will help you to get around and talk to and connect with Dutch people. People will appreciate that you are making an effort to speak Dutch. If you want to learn more common words and expressions, then please check out our other posts.

If you are serious about learning Dutch and you want to master the basics in a short amount of time then check out our easy, fun and fast Online Dutch course. While it can take you a while to learn a language by searching things on google and using apps, – with this comprehensive language course, it will just take you a couple of weeks to see some real progress in your abilities. You will be surprised at how  quick you will be able to talk in Dutch and leave a good impression!

Free course: Learn How you can “Greet Someone” and “Introduce Yourself” in Dutch

This amazing 25 min. course will teach you, step by step: the words, phrases, pronunciation and practice your speaking, listening and reading.

Even if you have never spoken Dutch before + BONUS PDF Flashcards 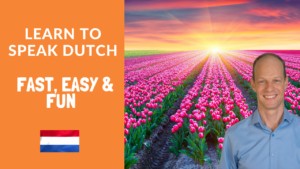